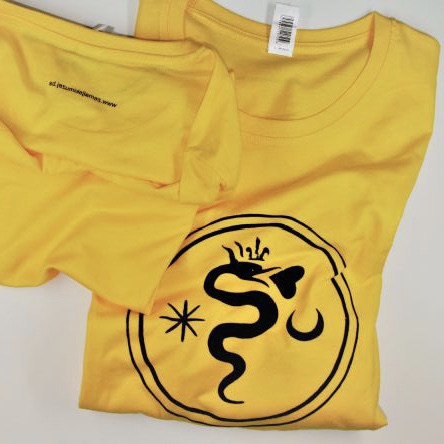 T-shirts with the heraldic symbol of the Bosnian queen Dorothea Garai. Dorothea Garai (1410-1438) was a prominent Hungarian noblewoman who, in 1428, married the Bosnian king, Tvrtko II Tvrtković, earning the title of the queen of medieval Bosnia.
The heraldic symbol of the Bosnian queen Dorothea Garai consists of a circularly shaped composition in the central part of it is a dragon crowned with a lily that swallows a human heart. To his left and right are a crescent and a star. The lily above the dragon's head is a symbol of the Kotromanić royal dynasty while the heart symbol is taken from the coat of arms of the House of Garai.

Colour: combination of yellow and black